Overview: gases are made from particles randomly moving in all directions. When these gas particles hit a surface they exert a force on that surface that scientists call pressure. Pressure is simply force per unit area (N/m²) which is also given the unit pascal (Pa). Increasing the number of particles of a gas, its temperature or decreasing the volume of its container will all increase the gas pressure. If you increase the temperature of a gas, but hold the volume constant then the pressure will increase. This is because the speed of the particles increases when temperature is increased so there are more and harder collisions. Unlike solids and liquids, gases have large spaces between particles and so can be compressed or expanded by changes in pressure.

Key concept: when gas particles collide with the surface on an object they exert a force. The more collisions per unit area the greater the pressure.

From big idea: all matter in the Universe is made of very small particles

Misconception [scientific idea]: random movement of gas particles is a wiggly movement [gas particles move randomly in straight lines until they hit the walls of a container or other air particles; gases don’t have a mass [gases do have a mass]; gas pressure depends on the mass of molecules [gas pressure does not depend on the mass of molecules]; only wind exerts a pressure [still air exerts a pressure]; air is sucked into a syringe [air is pushed into a syringe because of the higher atmospheric pressure]

Help students to understand that gas pressure is caused by air particles colliding with the surface of an object and exerting a force. You can do this by modelling air particles (soft tennis balls) hitting a safety screen (surface) held by a student (wearing eye protection). Obviously, choose carefully the students to demonstrate this or you may decide it’s safer to throw the balls yourself! You could adapt this model by throwing balls on both sides of the screen – the key point is to make pressure comparisons.

Pressure in gases and particle movement

KS3 activity to get students thinking about particle movement and gas pressure. Students think through a problem involving the movement of a single gas particle inside a container to help them understand pressure. This idea came from discussions with beginning science teachers who felt the term randomly moving particles was misleading. (PDF on pressure of gases and particle movement)

Key Stage 3 practical demonstration and written task on air pressure using the egg in a bottle. Students describe and explain what happens to the air particles during the egg in the bottle demonstration. Introduce students to sequencing in time (initially, subsequently, penultimately, finally) to help structure the sequence of events in the demonstration. You can focus thinking and scaffold writing by showing the stages of the demonstration that need to be explained using the image in the resource. The key point here is that students must consider the pressure inside and outside of the bottle to make sense of what is going on. (PDF) 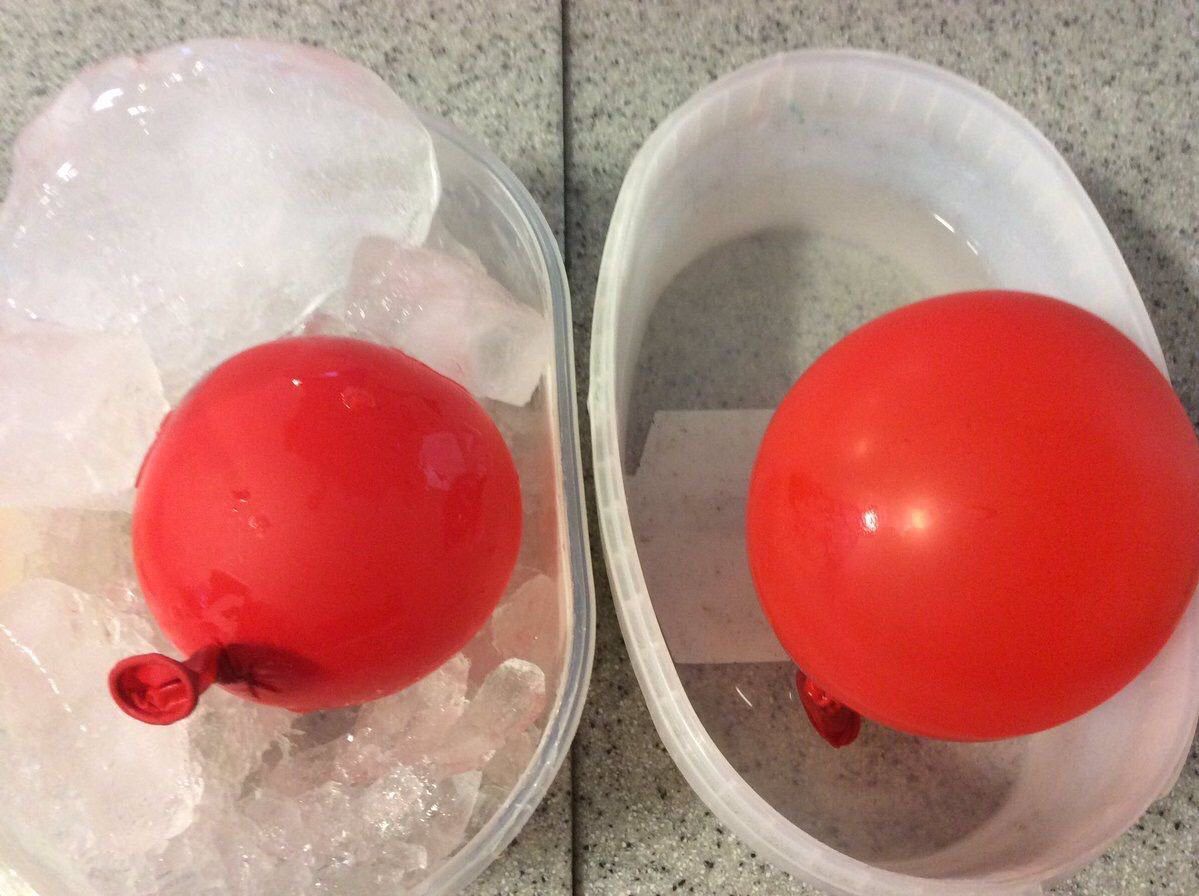 This simple, but effective demonstration is a powerful way to show the effect of temperature on the volume of a gas. Simply blow up two balloons to equal size, place one on ice (or in the freezer) and one in just boiled water. Ask students to make a prediction as to what will happen next to both the pressure and volume of the balloons. After temperature has had time to act, show students the balloons and discuss the explanation. To check students have understood the concept, ask them to explain what will happen when the two balloons are returned to room temperature.  This image was provided by @TJohns85 . Tom provides further information on teaching pressure on his blog here.